Cota is the  award-winning, patented technology by Ossia that delivers power wirelessly, over the air, at any distance, to devices in motion, safely.

But what about the company behind the technology?

Wireless Power is no longer a technology of the future. Over the course of 90 years, since Nikola Tesla first set up his experiment of wireless power transmission in his East Houston Street Lab, many have tried to crack the code on moving power through the air. There have been several concepts tried, some even making it to market. There have also been intermediate steps to wireless power, such as Qi (coil charging), which technically does not require a cord to be plugged into the device, but does not allow for the freedom of motion and use.

Ossia has refined the retro-directive principles of sending wireless power, safely, at a distance. Cota Wireless Power is long-range wireless power delivered without cables, batteries, line-of-sight or charging pads. Uniquely to The Cota Technology, it is certified safe by global regulatory bodies in over 60 countries for use in environments with people and even for wearable devices. The Cota Technology is now in commercial development and deployment.

Wireless power is a foundational technology, which will be inherent in most devices around the world, following the demand path of Bluetooth and WiFi. The Cota Technology is setting the global standard for wireless power transfer (WPT). Wireless power offers so much more than the ‘convenience’ of not having to plug devices in, but allows for new product innovation through dramatic reduction or elimination of large, space-consuming batteries. With global mandates to reduce waste and environmental impact, implementing wireless power is a huge step toward eliminating the need for mining, manufacturing and disposing of lithium.

With the current rate of IoT growth and electronic device innovation, current power delivery methods are not only limiting to what is possible, they are simply not sustainable. Consider the two primary power sources that product developers are using today for electronic devices and IoT:

ANSWERING THE CALL FOR SUSTAINABLE DEVELOPMENT

The United Nations has issued 17 Sustainable Development Goals (SDGs) for the world’s innovators and product makers. These goals include responsible consumption and production, decent work and economic growth, industry innovation and infrastructure, and climate action. These have been developed over decades and have involved many countries and the UN.

Hatem Zeine, Founder. CTO and President of Ossia, realized the feasibility of over-the-air power delivery, and, in 2008, started a company to follow up on his vision. The company, originally called Omnilectric, was the stealth breeding ground where Zeine and his team of talented engineers designed and prototyped the early Cota system.

Ossia was officially launched in 2013. Its name comes from the musical term “ossia”, which indicates an alternative passage in a score. What word could better to describe not only the technology, but our vision, our mission, and our team? What we do isn’t a continuation or advancement of previous work in the industry, it’s a brand new scientific approach to simplify the world we live in today. An “alternative passage” that will change and power the future.

Today, Ossia is headquartered in Redmond, Washington. Our amazing team continues to innovate and improve our Cota technology, as evidenced by our 200+ US and international patents; our regulatory approval in the US, UK, and over 60 other countries; and our partnership with global development partners.

With Ossia and Cota, the future is always on, and sustainable. 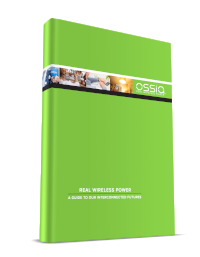 Start Learning!
This site uses cookies to offer you a better browsing experience. By continuing to navigate through this site or by clicking Ok, you consent to the use of cookies on your device as described in our Privacy Policy.OkPrivacy policy